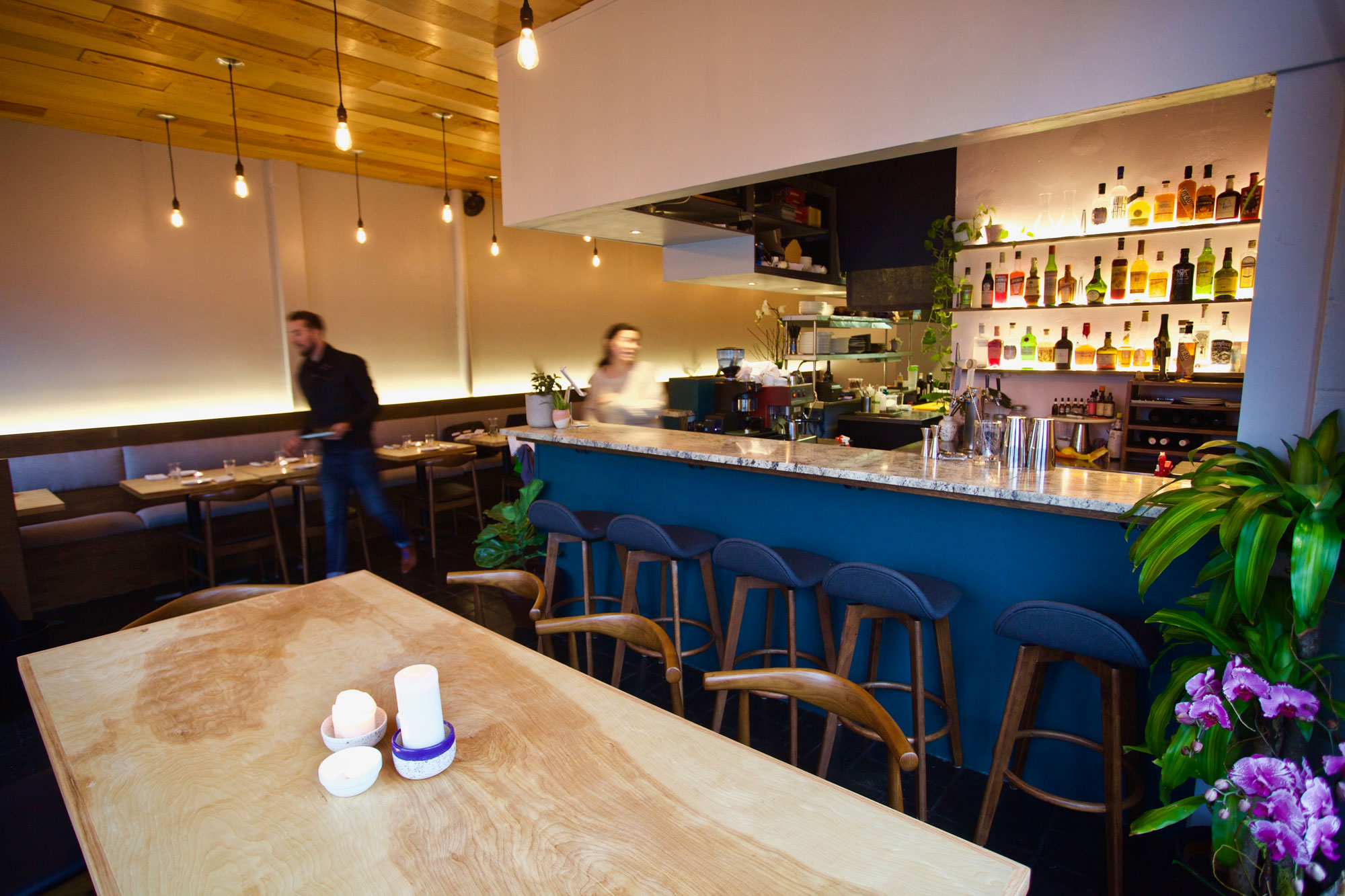 Pacific Northwest-inspired restaurant Dachi (“Pal” in Japanese) is set to open this Wednesday in the old Campagnolo Roma location at 2297 East Hastings Street.

I looked inside Dachi during a break in yesterday’s rains and found the 1,200 sqft space just about finished. It’s not often that first timers are on track and primed to open on schedule, but the trio of Miki Ellis, Stephen Whiteside, and Chef Tyson Viteychuk appear to have their 40 seat vision ready to go.

Tyson had just finished prepping some pork belly when I’d walked in, its lingering scent making for an intoxicating introduction. The room was only partially set in the wake of the previous evening’s successful friends and family service, but it was complete enough to convey its aesthetic in full. Though there are very few curves to it, the new restaurant looks and feels softer and more elegant than its predecessor, without crossing the redline of fancy. They were going for a refined but relaxed neighbourhood spot, and I think they’ve achieved just that.

If this is the first you’re reading about Dachi, here are the basics (copied from the story I wrote about it last month):

They’d done a lot of work already when I looked in on progress last week, but there was obviously much work to be done considering their desire to be open before Christmas. I noticed a few big changes. Gone, for example, are Camp Roma’s couches, which had been picked up from DB Bistro’s fire sale back in 2011. They’ve been replaced by a long banquette that curls round for a little cloister table near the front door (reminiscent of Table #1 at Bao Bei).

Also noticeable, the shades were off the many hanging light fixtures with the exposed bulbs brightening up the place, and the window gap above the four-seat bar is taller now so it no longer feels like a kitchen pass. I’m excited to see what the finished result will look like, especially the exterior mural by local artist Ciele Rose.

The 40-seat restaurant will be of the farm-to-table sort, featuring an ever-changing menu designed to flexibly reflect the best of what’s in season. Tyson has built up good relationships with local suppliers over the years, so even though I have no idea (yet) as to the sort of dishes he’s planning I trust they’ll be rooted in the region. His cooking will be supported by a wine-focused drinks card supplemented with sake, craft beer and cider. Miki and Stephen have plenty of experience on this front, so it’s fair to expect good and interesting things.

They want Dachi to have a neighbourhood vibe for Dachi, which is to say they’re aiming to strike a cozy balance between refined and casual. Service will be dinner only to start, with weekend brunch to follow.

As you can see from the menu above, prices are in the ‘accessible’ sweet spot with most dishes hovering around $20. It reads deliciously too, especially that country-fried steelhead with horseradish gribiche! There are just 12 dishes on offer (including two desserts), plus a short but well-constructed drinks card. I’m looking forward to exploring both when they open for real.

I’m told they might go for another test run tonight (with a very limited menu), closing Tuesday for a final tuning before Wednesday’s proper launch. In the meantime, take a closer look inside…

We’ll be opening on Wednesday – officially! Tonight we’ll open the doors at 5pm, but no one really knows we’re open, we’ll just see who trickles in from the neighbourhood. Monday is chef’s day off, so we will be running “no food” on Mondays (cheese+meats, plus a daily bowl of something warm and filling) with bev features every week. We’ll be closed this Tuesday to regroup, then off to the races on Wednesday! Following a seven year run at 2297 East Hastings Street, the Roman-inspired eatery will shut down for good on November 8th.