What a difference a week makes! We can now safely say with great glee – after a long and tumultuous campaign that saw us watching on tenterhooks as mail-in ballots trickled in from populace divided – that…Laurie Throness has lost his Chilliwack-Kent seat. What a terrific repudiation of exclusionary rhetoric in the valley on the same day Trump was also defeated (the mail-in ballots also saw the NDP’s Harwinder Sandhu upset the Liberal incumbent).

It also looks like a vaccine is on the horizon, Canadians are boycotting Amazon-owned Whole Foods (for the wrong reasons, but hey, I’ll take it), and yesterday saw the Mi’kmaq acquire 50% of Nova Scotia-based seafood giant Clearwater Seafoods which means the guys who burned down Mi’gmaw buildings and smashed Mi’gmaw boats and trucks will ultimately be working for the Mi’gmaw.

The American election was another disastrous showing for first past the post and a slight rejection of Trump’s hateful xenophobia. It was also pretty joyful watch them book The Four Seasons Total Landscaping Centre instead of the hotel. I’m not going to talk about how Kamala is a terrible neocon cop or how Biden was a disastrous candidate. New Sean only talks about positive things like how the first transgender woman was elected to the Senate, how Oregon decriminalized personal possession of street drugs (your turn, Horgan), Florida voted for a $15/hr minimum wage, Colorado voted for 12 weeks paid parental leave, and Arizona increased taxes on the rich.

Also, New Sean is also not going to find any fault with the following: B.C. extends rent freeze until July 2021 due to ongoing COVID-19 pandemic. Nope. Not that this is just another temporary stop-gap that doesn’t fix the affordability crisis or anything. For now, I’m just enjoying a nice hot cup of landlord tears:

Fuck this, New Sean is dead. I’m livid. A bunch of pearl-clutching, luxury car racing, astroturfing millionaires have managed to totally derail the conversation away from the disastrous effects of gentrification, endless displacement, astronomical cost of living vis a vis unparalleled unearned wealth for developers and lucky property owners and convinced everyone that we’re in some sort of Escape from New York crime-ridden hellhole and that we need a new unit to call if someone is “using drugs in the park or sleeping in your doorway”, even though the police admit crime is not going up. Fuck. This. Shit: VPD creates new unit to respond to calls previously deemed low priority. Vancouver city council passed a clear motion to deprioritize using police to respond to situations like this. The VPD are a gang and have a total disdain for the democratic process. City Budget discussions are coming up soon. You know what to do.

And every year we publish a glossy list of robber barons and wannabe 1%ers like Chip Wilson, Bob Rennie, Ryan Beedie, and Jimmy Pattison and sprinkle in a few activists for credibility and call it The 2020 Vanmag Power 50. Opioid deaths are skyrocketing and you have the nerve to publish this onanism. That being said, putting Kennedy Stewart last is a nice touch that says an awful lot about who really runs this city.

And then there’s Victoria, who shut off hand-washing water at a tent camp. Shame on you: Volunteers Built Showers for Victoria’s Unhoused. They Were Left High and Dry. I can’t even imagine Dickensian London being this fucking vile.

It seems like Dr. Tam is the only one concerned about actually addressing the root causes of inequality: Dr. Tam’s Bold Diagnosis of What Ails Canada.

From the start, we’ve been assured that “we are all in this together.” Dr. Tam knows better. Some of us are well-insulated from COVID-19, while others can’t escape it. For poor people and other marginalized groups, they make this a syndemic, far more dangerous than for those better off.

I mean, BC can’t even clearly articulate our new lockdown strong suggestion rules: Confusion prevails around new COVID-19 restrictions in B.C.. Hmm, maybe this will simplify it for you. If you’re paying to socialize, it’s safe. Social gatherings that don’t generate revenue are unsafe.

Evicted renters sleeping on your couch until they find a place? Unsafe: ACORN has had a record number of evicted contact us the last month.

Surrey, we need to talk. See your neighbour, Richmond? Be like them: 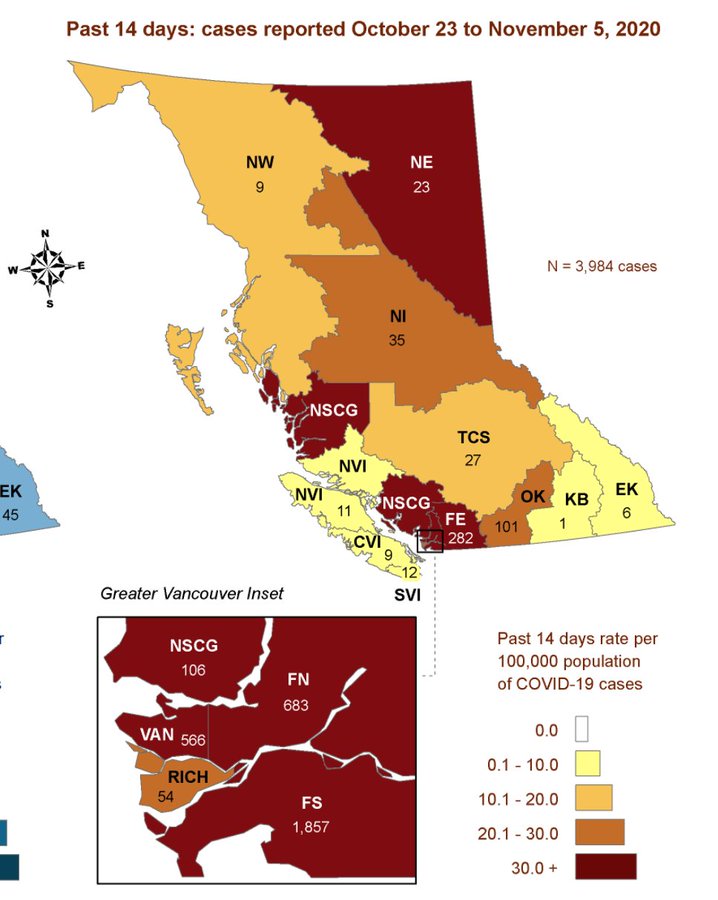 This doesn’t help: Surrey politicians appear to have violated public health order as COVID-19 cases in region skyrocketed. Spoiler alert: it was the BC Liberals.

Then there’s this: ‘It looked like Woodstock’: More than 85 tents pitched in Peace Arch State Park Sunday. Exactly like Woodstock except instead of passing joints around they were passing around a virus that has killed 1,279,184 people. Peace and love!

Meanwhile: B.C. Supreme Court judge orders surgeon to deny trans teen’s mastectomy wish. Fuck the Province newspaper for repeatedly misgendering this teen and sensationalizing the issue by completely failing to mention the Infants Act, that you can get an abortion without consent, and that this kid probably already had extensive mental health consultations prior to his surgery date. No parent has ownership over their child’s body let alone a mother who hasn’t been with the kid since he was five months.

Mobility pricing for Vancouver not going anywhere without more political support. What sort of backwards YIMBY environmentalism is this? Push workers out of the city then charge them fees to drive back into town so they can cook our food and clean our glimmering empty safety deposit boxes in the sky. Classist and racist, that’s Vancouverism.

Enter: Imagining an affordable Vancouver for 2060. City-wide plan be damned. Let’s make an equitable, livable and affordable city for all.

Because we shouldn’t have to roll the dice on a fat inheritance to be able to live here: Inheritance, not work, has become the main route to middle-class home ownership.

Bonus: The making of Today’s Special and how it was the wackiest TV show in Toronto history. This show had a very profound affect on my personal development. It might explain a few things.