Menu
Back to: The Comfort Food Guide to Vancouver
List Map

The Comfort Food Guide to Vancouver

This ever-evolving list is the anchor of a new series that seeks to map out Vancouver's best and most legendary comfort foods.
Article 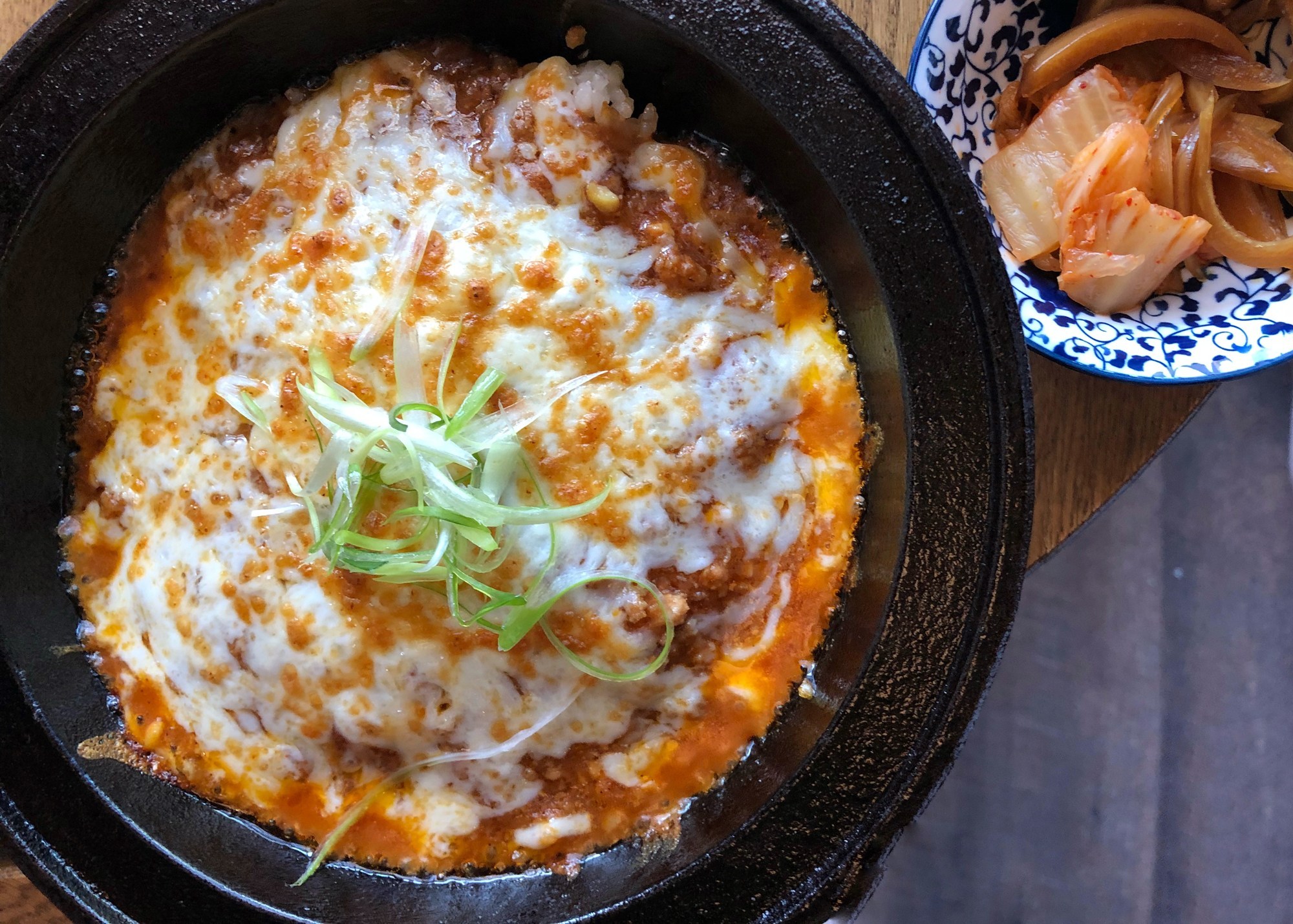 Launch Map
You Need To Try This

The Comfort Food Guide to Vancouver

This ever-evolving list is the anchor of a new Scout series that seeks to map out Vancouver’s best and most legendary comfort foods. Expect to see new items added every week. We encourage readers to steer us towards their favourite Vancouver comfort foods in the comments or by using the hashtag #ScoutYVR on social media.

The enjoyment of food is a wholly subjective pursuit. Your perspective, experience and palate will be different than mine, as might your idea as to what constitutes comfort food, so take this map and guide with as many grains of salt as you need. If I’ve missed something awesome, let me know. This feature was designed to grow, just like our bellies! Now dig in…

Behold ‘The Doug’ breakfast sandwich, which is only available at the Thurlow St. location of 49th Parallel Coffee. It sees a spongy, golden brown brioche bun holding chive-enhanced soft-scrambled eggs, good maple bacon and caramelized onions under a blanket of processed American cheese and a generous top spread of garlic aioli — all tightly assembled like a Mozart piano concerto. I’m 99% certain the immaculate construction was inspired by the beloved “Fairfax” sando made famous by the popular Eggslut chainlet in California, which is to say it starts and ends delicious. A whole restaurant could be built around this thing, which can be enjoyed for just $9.

The hearty fricassée at Chambar is a dish I regularly climb into like a onesie pair of pajamas. It’s been on the menu at the Belgian-Moroccan restaurant since forever, I assume because it’s so damn satisfying. There’s just so much going on beneath the two fried eggs, watercress and apple matchsticks pictured above, including thick chunks of slow braised short rib meat that gives way on the tooth, impactful little balsamic vinegar-licked cipollini onions that squish flavour, little globs of applewood smoked cheddar cheese and enough chopped up pieces of potato to round the whole thing out. The wintry braising liquid at the bottom of the skillet ties everything together like a chalked-up complex equation, and makes for a good scarpetta situation if you have the patience and presence of mind to save your side of bread to the very end.

One of the most satisfying things in life – right up there with cold beer and raising babies – is the sensation of biting into a pillowy xiao long bao (aka “soupy dumpling”, “XLB”) and having its porky-chicken umami broth explode across your palate like a hot flood of amazement. One can get XLB at countless restaurants across the Lower Mainland but by habit I go through steamer baskets full of them at Dinesty Dumpling House, an always bustling Chinese eatery in the heart of the West End’s Ramenland.

Go to an Italian joint, expect meatballs. Right? Head anywhere outside Italy, and this will almost always be true. It most certainly is in Vancouver, where meatballs and Italian restaurants have long been hand in glove. But as with most things, not all are created equal. If there was a champ among them – one worthy to be the first order of meatballs to be included on this map of Vancouver comfort foods – it has to be the juicy, saucy, sweet and deeply savoury ones offered since day one at Osteria Savio Volpe. Made using the holy trinity of beef, pork and veal studded with pine nuts and currants, the impactful orbs are soaked in a neckbone gravy that diffuses into the meat and amplifies their taste to a degree that almost shocks the palate, which will never forget the moment for as long as its tongue wags. (Best consumed with an appropriate glass of wine and a side of bread for scarpetta action.)

One of the most deeply satisfying, rainy day indulgences that Vancouver has to offer is ramen. And it’s a good thing that there’s plenty of it! A lot of local food lovers keep personal registers of their favourite bowls around town and refer to them at different times of the year and for different moods and urges. I’m no different. The richly flavoured two miso ramen at Danbo in Kitislano is the first of many bowls of ramen destined for inclusion in this guide. It’s just so damn good and restorative during the winter months — a real spirits-lifter. The thin noodles still have some bite to them at the “standard” level (you can choose from “very firm” to “very soft”) and the fukuoka-style tonkotsu base broth – which I more often than not choose to have “rekka” style (amplified with bright ichimi togarashi powder for colour and spice) – is an umami bomb that keeps going off to the last delicious drop. What’s more, the thin slices of chasu pork are meltingly tender. But is it worth lining up for? Absolutely, even in the rain.

What makes this pizza so good is what makes it so different. The pimpled thin crust is standard enough (though I think it’s a sourdough starter) and the base sauce is pretty typical — it’s the topping combination that elevates it to the sublime. I’ve enjoyed this “Hawaiian” over a dozen times since I first tried it in 2016, and to be honest it was one of the inspirations for starting the comfort food guide in the first place. I’ve certainly sung its praises before: “This thing is a spicy weirdo — a gas-fired tropical freakshow of sweet pineapple, crumbled pistachios and capicola ham amplified by a neon-intense jalapeno crema.” I mean, just look at it! See that spiral of green, squirt-bottled spice? It’s such a kick in the balls of the Associazione Verace Pizza Napoletana that it makes me giggle a little. Equally glorious middle fingers are those brûléed bursts of pineapple cutting through the salt and spice and the crumbled pistachio studs adding texture and piney nuttiness where one would think none should really belong. Put it all together and it plays the palate like a drum set,  Take one ingredient out – pineapple, for example – and the whole construction collapses. I acknowledge that the mere existence of this pie will remain an affront to some, and that my appreciation of it is an admission of my insurmountable mangiacake-ness. Be that as it may, this thing is just so damn good – a ludicrous Tesla among self-important Ferraris – and you should try it. As I’ve said before: If you don’t like it, I’ll eat it.

Scotch Egg at The Pourhouse

Developed in the UK during the early 18th century as a traveller’s snack, the humble Scotch Egg is a deliciousness delivery system in a league of its own. Basically a boiled egg wrapped in a cocoon of sausage meat then rolled in breadcrumbs and deep-fried to a golden brown, they are best served hot and halved. In Vancouver, you’ll find the tastiest, most comforting expression of the salt and peppered classic at Gastown’s dependable Pourhouse, where it exists alongside a dollop of spiced mayonnaise as a popular (and affordable) mainstay on both their regular and Happy Hour menus. Best paired with a cold lager beer.

Gambas al Ajillo at The Sardine Can

A popular sharable in the heart of Gastown. The shrimp are flash-seared in spiced olive oil with garlic, sherry, plenty of paprika and a parsley/lemon finish. Great with a cold, crisp glass of beer or sips of Sauvignon Blanc. Don’t neglect the leftover sauce at the bottom of the dish. Get some crusty bread and go to town!

The Sardine Can 26 Powell St. MAP

Best when still warm, these chubby discs of awesome are one of the most dependably delicious things about life in Vancouver. A Seth Rogan favourite.

These crispy, tangy, garlicky beauties are one of the chief reasons why this Cambodian restaurant in Chinatown is always sporting a line-up. Legendary. (Also of comfort food note: butter beef and Chinese sausage fried rice.)

The ultimate Mexican comfort food! Submerge your fork into the volcanic stone bowl and pull up a stringy prize of molten hot cheese and chorizo bits. A side of fresh tortillas awaits.

So simple and satisfying. The Thuringer sausage is the way to go. Just make sure you don’t skip the house ketchup for the full effect.

These authentic carnitas tacos with real deal corn tortillas are like a loving hug on a cold or otherwise shitty day. For best results, ask for campechano – a mix of pork shoulder and belly.

Cinnamon Bun at Grounds For Coffee

These things are the ultimate indulgence. Thick, dense, gooey, sweet and unforgettably cinnamon-y, they are a total pleasure to fork and un-swirl.

These crunchy slabs of squeaky deliciousness are arranged on a bed of lemony smashed peas with mint yogurt and a potato/zucchini pancake (and they might just be the fanciest thing to ever make this ever-evolving list). We asked drinks expert Talia Kleinplatz to map out her favourite imbibing spots in Vancouver for the long dark that lies ahead. The dish is all about little jicama and green onion rice cakes made with coconut milk and mung bean. They're like little gifts for your face...