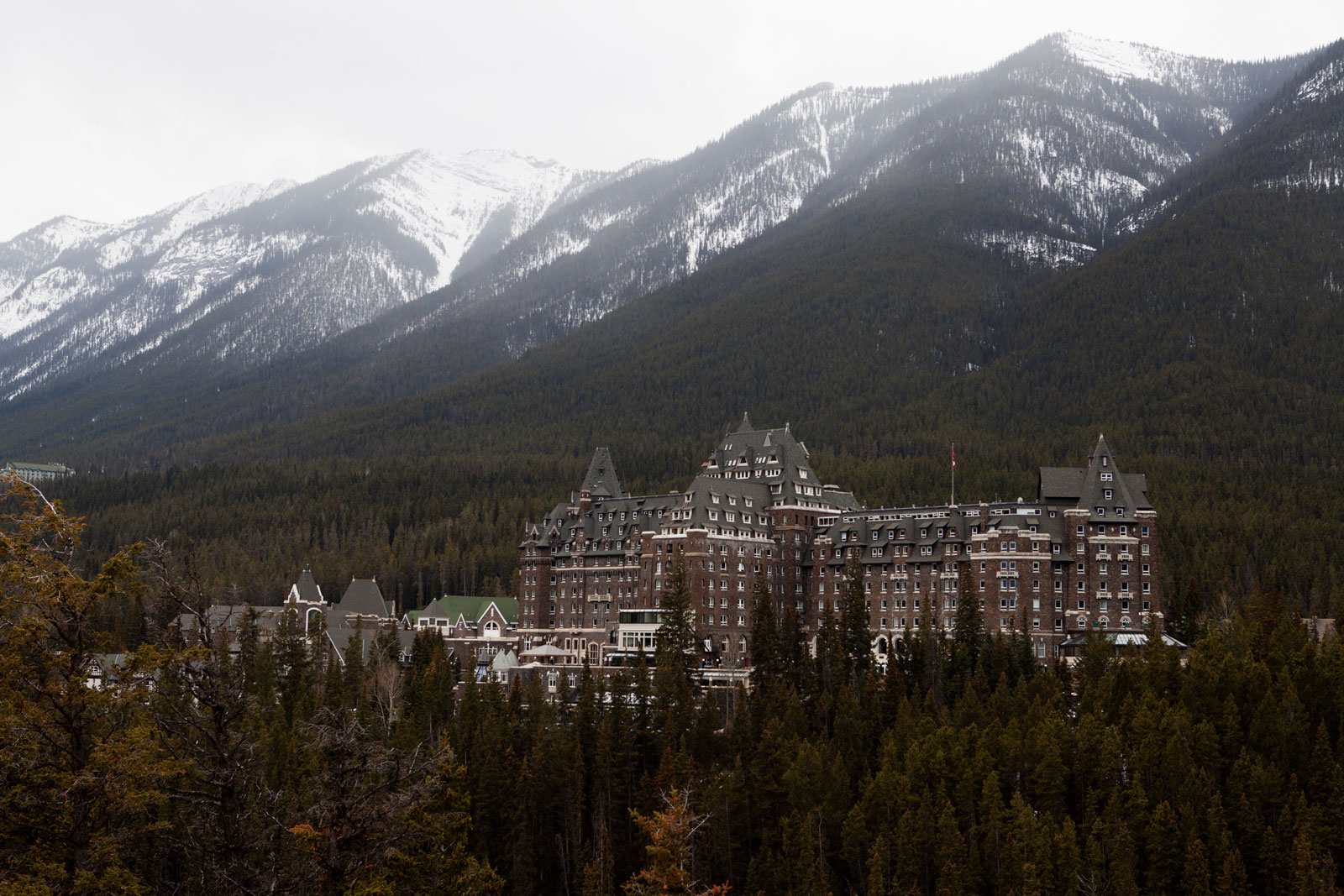 Banff reminds me of somewhere. A lot of places actually. Every turn on the road in evokes a memory and yet the national park is singular in its expanse and beauty. The landscape sees gently rolling hills and flat farmland graduate to impossibly rugged peaks and shadowy valleys. Whether coming from east or west, arrival feels familiar.

On my first morning in town, I woke up before the streets came to life and walked out of The Mount Royal Hotel to get that famous photo on Banff Avenue. You know the one from a low angle looking up at Cascade Mountain? But before I could even pull out my camera, I paused at the familiar sensation of cold morning air on my bare arms. I was brought back to days spent in Northern Ontario where late summer mornings were met with the nip of an early autumn breeze. The similarity was uncanny and if I closed my eyes now I can still feel the quality of that cool air; I can see Eagle Lake and the gentle mist lingering over the still water.

Wandering a block over to Bear Street (with an equally gorgeous view of Cascade Mountain), I chanced upon Wild Flour Bakery. The cafe is reminiscent of a breakfast spot I once visited in Cold Spring where the staff knew their customers by name and could recite coffee orders by heart. But the freshly baked sticky buns sitting on a tray next to the cash register is really where Wild Flour sets itself apart. “Do you have a preference?” asked the barista pointing to the baked goods dripping with golden syrup. “They’re still warm.” I asked her which was best and she pulled a corner piece noting that a crispy outer edge combined with a soft inside is truly the best of both worlds. Yes indeed.

A coffee to-go and a belly full of baked goods is the best company for the short hike up to The Surprise Corner. Spoiler alert- the big “surprise” of the Surprise Corner is an unobstructed, stunning view of The Fairmont Banff Springs Hotel. It’s actually not much of a spoiler because 1) a simple Google search would have ruined the surprise anyways and 2) no picture will ever do this view justice. Nevertheless, I couldn’t help but snap a photo of the scene and send it to my husband, who quickly responded that it reminded him of The Overlook Hotel from Stephen King’s The Shining.

The comparison is apt given how they actually do look quite similar. Also, Banff Springs has had its fair share of hauntings. During an afternoon culinary tour of the hotel with Alberta Food Tours, one of the guides quietly explained that the hotel staff don’t use a particular set of washrooms between the hours of 1-3pm to avoid a run-in with certain spectral residents.

No one could fault you for mistaking the historic site for an actual castle. It has, after all, hosted royalty on more than one occasion. No doubt its numerous kitchens have used the beauty of its surroundings to inspire a culinary program that can live up to the property’s prestige. The unique challenges of running the food and beverage operations of a hotel within a national park, however, have forced chefs and bartenders alike to adopt an innovative approach to sourcing ingredients and menu development. There’s no farmland within the park. There’s no foraging allowed either. Or hunting. Creative partnerships and farming models have become the basis for a program that aims to share local, sustainable dishes without compromising on flavour or originality.

Take, for example, the hotel’s urban cultivator – an indoor garden housed in the lobby, sprouting herbs and microgreens year round. It’s not only beautiful to look at, but it also serves to ensure the kitchen and bar have access to fresh, local ingredients grown right on site.

Bars and restaurants throughout Banff have adopted similar models to both support surrounding farmland while preserving the integrity of the park itself. Take, for example, Park Distillery. Part distillery, part restaurant, Park is not so different from similar establishments you’ve probably visited in Vancouver; that is until you realize that this is the world’s only craft distilleries located within a national park. In an effort to preserve the park while still creating a line of truly local spirits, the distillery goes on an annual camping trip to Canmore where they have partnered with a local spruce tree farmer. Over the course of two weeks, they forage for spruce tips which are brought back to their facility and used as one of the main botanicals for their Alpine Dry Gin.

Considering these thoughtful partnerships and a vibrant food scene, it makes sense that culinary competition Cochon555 would select Banff as the Canadian stop on its nine-city North American tour. Created in 2008 to increase awareness and education around heritage breed pigs, the competition brings together chefs, farmers and sommeliers who work in concert to create a unique nose-to-tail dining experience. Each chef partners with a local farm that provides them with a heritage breed pig (most of which are over 200lbs). They are given a week to create a series of dishes, using the whole hog to showcase the versatility of the feature ingredient. The five competing chefs share their creations at the main event where judges and guests alike can sample their menu. The participating farmers are also on hand to support their chefs and share their wealth of knowledge and experience with heritage breed pigs. This year, after much eating and deliberation, a panel of expert judges declared Chef Scott Hergott of Sky Bistro the winner. He will be heading to Chicago this fall to represent Banff in the Cochon555 finals.

So it was only fitting then that the final meal of my trip as at Sky Bistro. What you may not realize on the 7,500 foot climb up to the restaurant is that every ingredient that is used by Chef Hergott and his team also has to travel up the mountain on that very same gondola. This includes the 200lb pig from Bear and The Flower Farm which was the centrepiece of Hergott’s Cochon555 menu. He described the strange sight of his pig- literally wrapped in a blanket- making the slow climb up the mountain with the gondola door left open as the hog was too large to fit. There’s the challenges of cooking within a national park and then there’s the challenges of cooking within a national park on top of a mountain!

Hergott recalls the day he interviewed for the position of Executive Chef at Sky Bistro. As he looked out of the restaurant windows – a wrap-around, expansive view of the Rocky Mountains – he knew that the only way he could accept the job was if he was able to create food that stood up the beauty of his surroundings. He has taken the commitment seriously and created a menu that both reflects the unique experience of cooking atop a mountain and honours the farmers he works with and the ingredients they produce.

The meal he shared came in perfectly timed waves with pairings of wine and charcuterie, cheese and local honey, bison tartare and duck wings all of which meticulously incorporated ingredients local to the area and close to the hearts of those preparing each dish.

The multi-course dinner culminated in an unexpected yet familiar way when Chef Hergott placed a single butter tart in front of each guest. He told the table that everyone’s grandmother in Canada had a recipe for the dessert and it always reminds him of home. My fellow diners all looked at each other, slightly puzzled, noting that none of their grandmothers ever made them buttertarts. But mine did, as did my mother (who in turn taught me). I gave the Chef a knowing smile as I savoured the perfectly flaky crust filled with a golden, buttery, sweet filling and I was transported home with each bite.

This trip was made with the generous assistance of Banff & Lake Louise Tourism.