Why does it feel like everything is falling apart, all over again? An oppressive layer of the ashes of our failures to act on climate change coats the Pacific Northwest and shrouds our facsimile of a city. The supernatural beauty made our Potemkin Village all the more believable — a luxury resort paid for by money laundering and colonialism; an empty condo-filled Hedge City; a beacon of frontierism and faux progressive namby-pamby neoliberalism.

We continue to reel at the consequences of our inactions, be it the sharp rise in COVID 19 in part from opening the economy too soon, the (still) runaway housing market, and the bodies piling up from a poisoned drug supply. We continue to be surprised that this is how the system operates, that this is not a glitch and that if we continue to do absolutely nothing the future will make 2020 look like a utopia.

Add to this that over the weekend we saw a silo collapse at fibreglass terminal in North Vancouver, a massive train derailment near Hope, a massive fire destroying a portion of Westminster Pier Park, the cables of the Sea-to-Sky Gondola deliberately cut for the second time, some QAnon conspiracy theorists making asses of themselves and joining forces with new age hippies to protest mandatory mask laws that don’t exist, and course, the moths. Always the moths.

Also…plastic recycling is a myth perpetuated by Big Oil; white supremacy is still the ‘most persistent and lethal threat‘; the polarization and vanitization of our society continues unabated by greedy Internet companies who trade exclusively in human futures (yeah yeah, I watched The Social Dilemma); and Corey fucking Perry is going to the Stanley Cup Finals. I mean, WTF?

It’s hard not to feel like everything is falling apart. But sometimes that’s a good thing. The illusion of the permanence of capitalism is fading. We can create a post-scarcity world. Stay focused, stay sane, maintain your principles. We’re not helpless, we’re not powerless, we are powerful. We will get through this if we all put in the effort.

So with all that’s going on, these people decide to access Stanley Park en masse to protest not being able to access the park en masse. That’s some Peak Vancouver shit right there! My god. That picture! They’re literally standing in the most glaring local reminder of the climate crisis and bitching about wanting more car lanes.

Did you know David Fine is an Oscar award-winning animator but he still chooses to put his dumb arguments this far out there, week after week? pic.twitter.com/ipsvKRjj0K

In case you forgot, last week this reporter stood in human piss in order to completely miss the point. Now that’s what I call yellow journalism! ‘Can you imagine living with this all day?’ Vancouver restaurant to close due to rising crime. Sensationalist, callous reporting that doesn’t even attempt to go near the root causes of these issues. Namely that public washrooms are desperately needed in this city and that rich developers, landlords and speculators have managed to shift the narrative away from housing affordability to crime while absolving themselves of their role in perpetuating the current crisis.

The most brilliant part about the whole thing? Crime is actually down.

Opinion: Vancouver is Canada’s dumping ground for the homeless, and this needs to stop. Shocking, I know, but this is terrible reporting from Daily Hive. “In the City of Vancouver’s 2019 homeless count, based on those who responded, 16% (156 people) of the homeless reported they were from an area elsewhere in Metro Vancouver, while 31% (299 people) were from another area of BC, and 44% (435 people) from another area of Canada”. The statistics don’t show where the person was living when they became homeless. Read the fine print, Kenneth, and tell me again how “statistics do not lie”. 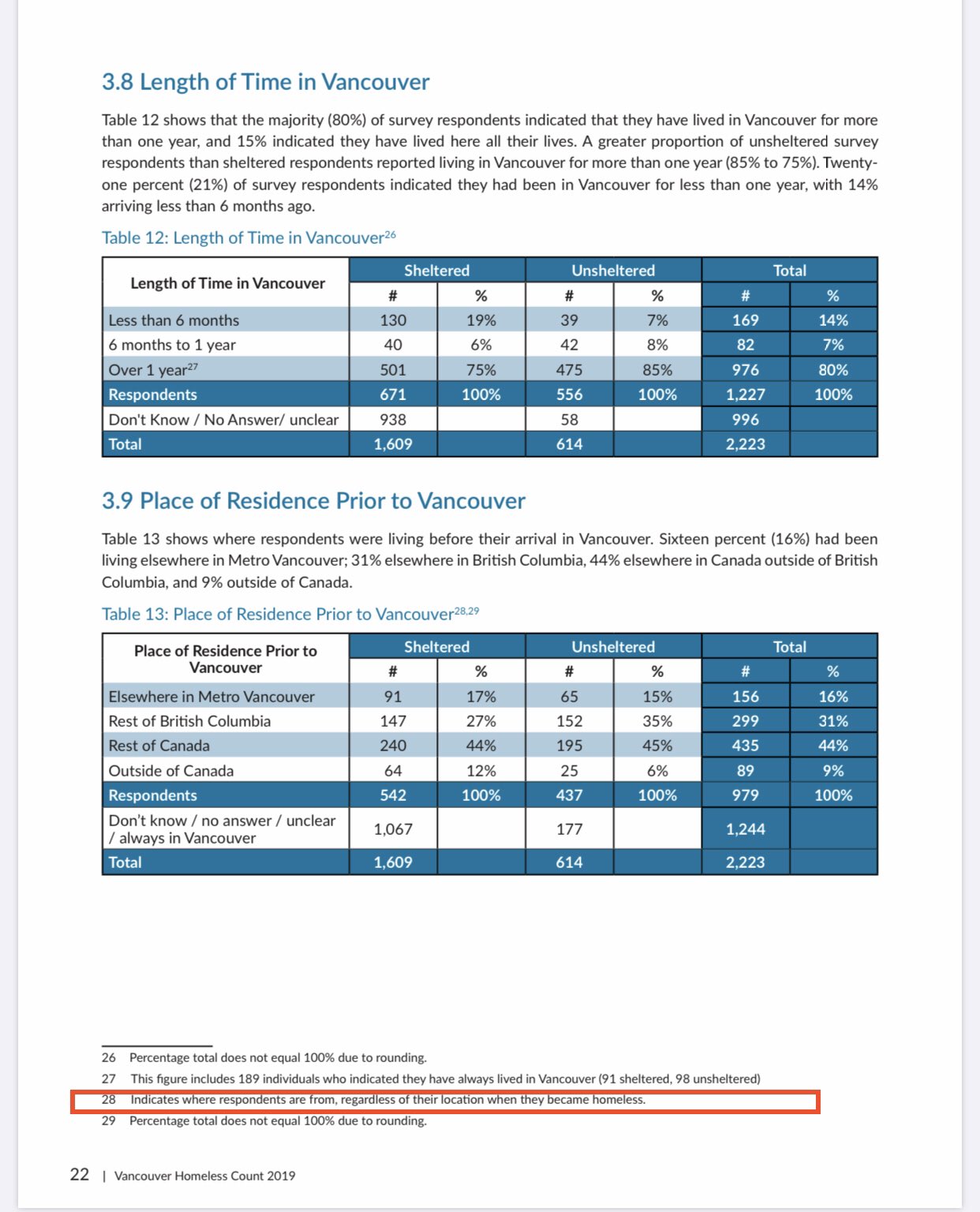 While the federal government is absolutely responsible for criminally underfunding housing in Vancouver, the idea that homeless people are arriving by the busload is a myth and distracts from our very own gaps in policy. It’s far more likely that they were made homeless by some unscrupulous slumlord (Jean Swanson: Full rent control key to saving Vancouver’s last-resort housing). I wonder how many of these anti-crime vigilantes are going to sign up to speak to council on October 6th to prevent more and more people from sliding into homelessness?

Damn it, Vancouver! Can we stop complaining about “keeping our streets clean”?

We should demand livable housing and supports for our vulnerable neighbours. This will benefit everyone far beyond tidy streets.

We can improve the local economy, our safety, and many lives by choosing to take care of each other.

I have a challenge to everyone complaining about keeping our streets clean and the rise in violence. I don’t expect you to understand that gentrification is violence or that inequality is violence, but I dare you to listen to speaker #13 from Friday’s Special Council Meeting speaking from Camp KT on a shared phone at 4:18:00. While heart-wrenching, daring the Mayor to “nut up and come spend a night” is the quote of the week.

It’s as though having people off the streets during in a pandemic is, you know, in everyone’s best fucking interests: As COVID-19 Cases Increase in Downtown Eastside, So Does Concern about Transparency. Is it just me or is it bonkers that it took a Tyee article for Vancouver Coastal Health to publish that outbreak at the West Hotel?

So how does Kennedy Stewart respond to a massive shortage of rental housing for people with incomes under 40k a year? He announces a massive build of private homes for people making over 80k a year. I wish I was joking: Vancouver mayor touts new housing program for middle-income earners. Never mind the fact that this is basically the policy equivalent of “It’s one banana, Michael. What could it cost? $10?“, or that he basically called a press conference today to announce a ‘new housing program’ which is not actually even a program yet but rather a proposed amendment to another Councillor’s existing motion. Check out the actual site. Now scroll to the bottom. See that? That’s a voter information collection tool to directly benefit his campaign database. That independent auditor’s office can’t come soon enough.

The thing is, Mayor, this has been tried before and it flopped. What’s going to stop these buyers from flipping these units for profit? What’s to stop them all from becoming Airbnb’s? Or is this just another tip of the fedora to the YIMBY crowd?

Well, looky here: Vancouver city manager Sadhu Johnston to step down at start of 2021. It’s a weird thing to totally get what you wanted only to realize that the most influential role shaping this city is in fact appointed, not elected. Sigh.

Tiny violin: Landlords in B.C. feel hit as fewer students rent during COVID-19 pandemic. Aw, so terrible! Not enough students with mountains of debt to exploit to pay their mortgages!

moving away from vancouver because the buildings are pink and that scares me https://t.co/pxcfkmWesA

J.K. Rowling billboard condemned as transphobic and removed as advocates speak out. If you think the reaction to this was extreme and that the billboard was an innocent act of free speech adoration for a children’s author, you need to understand that this was a dogwhistle, that the people responsible were gloating about this and have made their feminism appropriating reactionary transphobe (FART) views widely known, and that the charter of rights and freedoms does not extend to private billboards. You also need to realize that this billboard was aimed directly at mostly indigenous street level transgender sex workers and right near two indigenous community centres. This was no accident. This was a publicity stunt aimed at some of the most deeply marginalized people with the highest suicide rate on the planet and they got the reaction they wanted.

Oh, and if there was any confusion about where J.K. Rowling stands, she has quadrupled down on her commitment to transphobia: JK Rowling’s latest book is about a murderous cis man who dresses as a woman to kill his victims.

RIP Vancouver: MEC to be acquired by Kingswood Capital Management through CCAA Proceeding Français. Wow. To do this without a member vote is some shady ass Engulf and Devour type shit. I’m sure this has nothing to do with the recent efforts of workers to organize. What a slap in the face to all those who paid $5 for a membership which means, if my calculations are correct, they owe everyone $7.37!

Here’s the requisite petition: Save MEC.

This gets my, er, stamp of approval: Canada Post apologizes for printing stamps with severed John A. Macdonald head.

Nobody:
The Province: How Canada convinced the world to eat engine lubricant