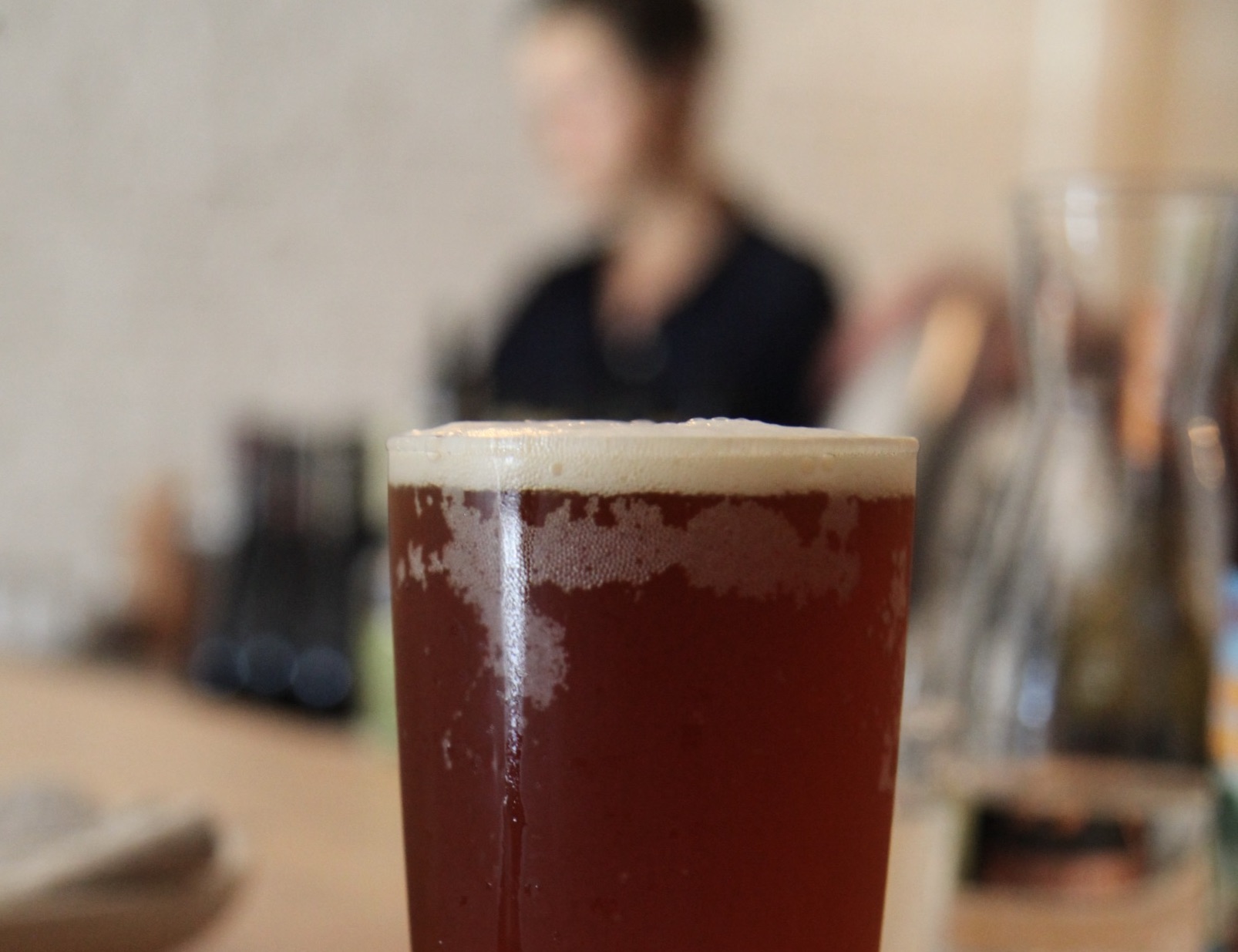 BEER + ART | 33 Acres Brewing is tapping into the beer and artist bond. This Friday night they’re launching their first Artist Series collaboration with Victoria-based artist Guy Ferguson. Ferguson’s photos will be adorning the walls as well as a brand new super-limited – only 50! – beer bottle label. He’ll also be premiering his new film and special edition t-shirts will be available for purchase. Weekends are always busy at 33 Acres, so if you want to get in on this artsy action then you’d better be prepared for the bumrush! Find out more.

ICYMI | At long last Container Brewing has officially opened its new tasting room in Yeast Van and it looks phenomenal! We poked our heads in last week, just 24 hours ahead of opening day (Friday, November 22nd), to get a good look at the space before it welcomed its first crowd of beer drinkers and revellers. Have a look for yourself and learn a bit more about the backstory and process over here.

EAST VAN-NIVERSARY | East Van Brewing Company also had reason to celebrate last week. The neighbourhood brewery held its second anniversary party on November 20th and it included the release of their new Sustenance Barrel Aged Imperial Stout and an epic cake by Amelie’s Cakehaus. If you weren’t at the party then be sure to show your face – and put some tasty beer in it! – to wish them a belated birthday. Tip: Next Tuesday would be a great excuse for an after work visit, since all beers are only $5 after 5pm.

COMING SOON | If your festive spirit comes in fermented liquid form, then you’ll be enthused to hear about Brassneck Brewing’s impending holiday-inspired beer which, from the looks of one of their latest teaser Instagram posts, contains a ton of cranberries. My best guess: a new super tart spin on their rotating Changeling beer. Consider it my “Xmas wish”. Stay tuned here.

CRAFTY CRAFT BEER | Beer is a great facilitator for holiday shopping – something that more than a few local breweries seem to be catching on to (although Strange Fellows’ Krampusmarkt has set the bar for beer and shopping events pretty damn high). This weekend, Field House is holding a Pop Up on the Patio – apparently it’s never a bad time for a patio party in good ol’ Abby – that features locally made ceramics, plants and art for sale, seasonal beer tastings and hot apple cider. Bonus: if you bring a piece of winter clothing to donate they’ll hook you up with a beer on the house! Full details here. Then next week, on December 5th, their neighbours Ravens Brewing will host their very own artisan market inside their tasting room. According to Ravens, you can expect “a cozy evening of Christmas shopping, holiday tunes, and of course some craft beer to enjoy as you take in our local artisans and their work! You can look forward to a variety of mediums in the paint world, home decor pieces, plant terrariums, and so much more!” If you’re in the area then be sure to swing by and show some support for your local creative community! Find out more.

PENTICTON | Not just content to host one crafty event, Slackwater Brewing has filled up their entire December calendar with them. The brewery’s weekly Sip & Shop Series kicks off on December 1st and will be taking place every Sunday during Happy Hour through to the 22nd. The list of seven total participating vendors will be changing slightly each week, but overall include jewelry, clothing, vintage, stationery and more. Hanging out with some creative people in a beautiful space while sipping on a glass of Solitude Amber Saison sounds like a pretty fine way to spend a Sunday afternoon to me! Find out more.

TAP TAKEOVER | Speaking of Penticton, if you haven’t been in a while then you might not have had the chance to taste many of Slackwater’s beers. Fear not! On December 11th they will be pouring from the taps at the Cascade Room for a special tap takeover featuring Sawmill Sour, Peach IPA, Solitude French Amber Saison, Mandarina Dry Hopped lager, WTF NE IPA and Deepwater Porter. The beer starts pouring at 5pm and the Supersonic Hearts Band hits the stage for their standing gig shortly thereafter (7:30-9:30), so you’ll want to show up early before it gets packed.

STRANGE PAIRINGS | Few breweries seem to be as creative with their pairings than Strange Fellows Brewing. In addition to the aforementioned Krampusmarkt craft fair and celebration, they’re also pushing the envelope with a few more unusual themed events. Last night was the inaugural Concerts on Tap series, which paired a flight of seasonal SF beers with four pieces of Baroque music performed by Heather Beaty on the flute, Shin-Jung Nam on the cello and Connor Page playing the Harpsichord. Keep an eye out here for future events. Next up on Tuesday the brewery is going to be absolutely KNIT (oof! that pun was painful, even for me) when, literally speaking, SF will be welcoming all local knitters to bring their projects into the tasting room for an evening of connecting, crafting and craft beer. Find out more.

PARTY PARTY | Parallel 49 Brewing has a couple of upcoming events that will appeal to two very different festive temperaments. First up, things are gonna be getting heavy when the brewery welcomes six breweries from BC, Oregon, California and Quebec, plus Merridale Cidery & Distillery for an all day celebration of imperial and strong beers. The event also coincides with the release of their new RIS 2019, Crown Jewels Barley Wine and Freeze Distilled Imperial Stout. Then, a couple of weeks later, it’s time to don your Santa hat for P49’s debaucherous Bad Santa homage party. Xmas cranks should probably sit this one out, since jolly red toques are required to get free admission. However, if last year’s holiday hi-jinx caused you to misplace yours then take note that Santa hats will also be available to purchase by donation at the door. More details on both events can be found here.

PLAN (WAAAAAY) AHEAD | Yup, the Vancouver Craft Beer Festival is already gearing up for its 11th annual festival, slated for the first weekend of June, 2020. We’re telling you now because early bird ticket sales start at Noon on December 1st and will only be available at their discounted holiday price until the clock strikes Midnight on 2020. The timing is perfect if you have some beer-lovers left on your holiday gift list (if you’re reading this then you probably do). Before you pull the trigger, you should probably also know that the 2020 festival is moving from its usual spot at the PNE to a new venue in False Creek for three – not two – days of drinking AND tickets are now all-inclusive! Find out more.

UPDATE | Not to dampen the spirit, but we thought it was only diligent to let readers know about the recent cancellation of this weekend’s Wild Night Out event, due to an unfortunate snag in licensing. Here’s the scoop, from organizer Mike Willis: “It was recently learned that the venue that was putting on the event did not have the correct permits as advertised for the allowance of alcohol. The venue has had several special events in the past, and it had gone unnoticed to the city until now. The people behind Wild Night Out have now changed our policies on who we operate with and we’ll be moving this event to another space as soon as we find the right atmosphere for this very special event. We are grateful for the many emails of support from ticket holders, and all of those ticket holders will be receiving an additional ticket to our Hopwired Festival 2020 event, alongside their ticket to the postponed Wild Night Out event. The best thing to come out of this unfortunate circumstance was that these beers are all cellarable up to five years, so we will all be enjoying them together sometime after the holiday season. We are fortunate to be in a province that is blessed with so many amazing friends who operate cideries, breweries and who are distributors who are only helping us grow this event with a wider selection of beers and ciders, while we find the right space and date to put this on. It won’t be too long.”

XMAS BEERS | It’s the Christmas Craft Beer Show this Friday and Saturday! The Victoria-based beer festival was organized to break up the interminable amount of time that generally exists between the big summer beer fests, which is something that I can totally appreciate. Now in its fourth year, the event is also a showcase for some of the best wintry beer styles made by breweries from across BC, like Bad Dog Brewing (Sooke), Salt Spring Island Ales, Smugglers’ Trail Caskworks (Langley), Small Block Brewery (Cowichan Valley) and Howl Brewing (North Saanich) – to name just a handful of the dozens of participants. As per festival standard the price of entry includes a commemorative tasting glass and some drink tokens to get you warmed up. Additional tokens are available for $1.50 each. Find out more.

BEER SCHOOL | The beer-education continues this December at Moon Under Water Brewpub. The second session in the five part series is a tasting, Q&A and discussion of the eight technical aspects of the brewing process, from malting to packaging, led by the brewery’s Brewmaster and Master Distiller Clay Potter. The hands on class also includes eight 4 oz tasters – that’s one per step! – and a full pint to finish. I don’t know about you but I sure dig that math! Get smart and sign yourself up here.