House-hunting as an Asian immigrant in Vancouver means navigating racism. Because we’ve conflated the flow of foreign capital with foreign people. Because since the Cold War we’ve dustbinned all understanding of class dynamics and put our faith in the market. Because we’d rather look for scapegoats than the conditions we’ve created that allow, nay, necessitate the kind of volatility we see in the housing market. We then simply apply pre-existing insular xenophobic mythologies in lieu of wholesale failures of the system.

Karen Quinn Fung unpacks it further: (1) Rich person is from country X. (2) Country X has negative stereotypes attributed to it through historic prejudice, reinforced by media portrayals, confirmation bias, etc. (3) All people from Country X, regardless of class, individual politics/personalities or subgroup status must be problematic for the stereotype. (4) All people who appear to be from Country X do not conform to my vision of society, my home, etc. because They’re All The Same.

And that’s just what I get as a young person. My parents are both boomers and immigrants, and even though they are so law-abiding they wouldn’t jaywalk, let alone engage in seedy real-estate fraud, they represent the most popular scapegoats for soaring real-estate prices in this city.

At best, it’s an unhealthy “us” versus “them” dynamic — at worst, it’s bigotry.

It’s interesting and timely that the author mentions boomers because there’s currently a raging debate about the term that intersects with what I’m talking about above. Bereft of any understanding of the systemic inequalities that are necessary for capitalism to function the kids blame an entire generation. I’ve done my fair share of boomer-blaming, but it’s simply a placeholder for the damage done to the safety net in those decades in the name of neoliberal austerity politics. That they are offended or offering excuses like #notallboomers completely misses the point, and the capitalists are all too happy to watch it go down as they escape the blame: 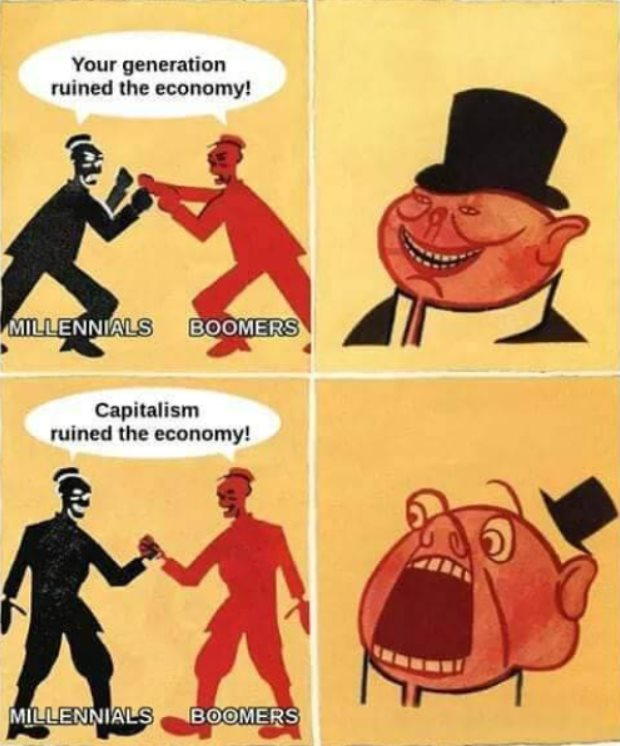 Besides, boomer is just a state of mind. Tell someone to speak English in Canada? “OK Boomer”: Tung Chan: Is speaking a language other than English really that bad? Imagine being so insecure that hearing another language hurts your feelings, instead of being excited that we live in a cosmopolitan society. These are probably the same people who buy vacation homes in Mexico and only bother to learn “dos cervesas por favor”.

Here’s another meme about it:

People who can’t afford rent are living in their cars, and cities aren’t sure what to do about them. Here’s an idea, how about you mind your own fucking business? If you can’t ensure adequate housing for your population you can’t decide what housing is illegitimate.

The uproar surrounding Patrick Condon’s article about reclaiming golf courses shows that we are simply not ready to tackle the fundamental challenges of housing in this any city: Three Serious Solutions to Vancouver’s Housing Crisis.

The core challenge is that city land prices are out of control, as are urban land prices around the world. In many global cities, land has inflated beyond the reach of average wages, no matter what local policies are imposed on immigration or zoning or taxation. As an asset for storing global wealth — like stocks, bonds or gold — urban land keeps inflating.

Adding density does not reduce home prices, or rents. In Vancouver, we’ve seen adding density merely increases the value of the land beneath denser projects, which face little downward price pressure because they remain desired assets for wealthier buyers. This drives unit costs beyond affordability for average wage earners.

Speaking of average wage earners: Behind the wheel of a 40-foot-long, 30,000-pound bus. Give them anything they want. You can’t change my mind.

He’s baaaack: Koi removed from Vancouver Chinese garden after otter infiltrates pond, again. And yes, I can tie this to class, the housing crisis, and global capital too:

“Beneath the fun and games of #TeamOtter and #TeamKoi lurked the same complexities of race and identity that seem to play a role in nearly all of Vancouver’s ongoing issues”. And like Vancouver’s ongoing issues, the absence of class analysis is egregious. When we talk about foreign buyers, we are talking about capital. And although it’s a flight of fancy to project these issues onto an otter and some koi, it’s nevertheless illuminating that Montecristo would publish an essay that fails to look at the structural imbalance of power that led so many to side with an indigenous animal over an imported luxury animal.

Comrade Otter is a logical progression vis-a-vis the internal contradictions of late market capitalism. Together with Gritty, the Surrey peacocks, the badger that wrecked Paul Ryan’s car and yes, Canuck the Crow, they make up a sort of atavistic totem that we can use to represent the eventual overthrow of the elites.

But hey, now you can buy a cute T-shirt for 25 dollars, because isn’t Vancouver awesome?