Menu
Back to: Eating Up the Arts of Seattle
List Map

Kristin Lim hits the Emerald City for the Seattle Art Fair and maps out plenty of good PNW food, drink and culture.
Article 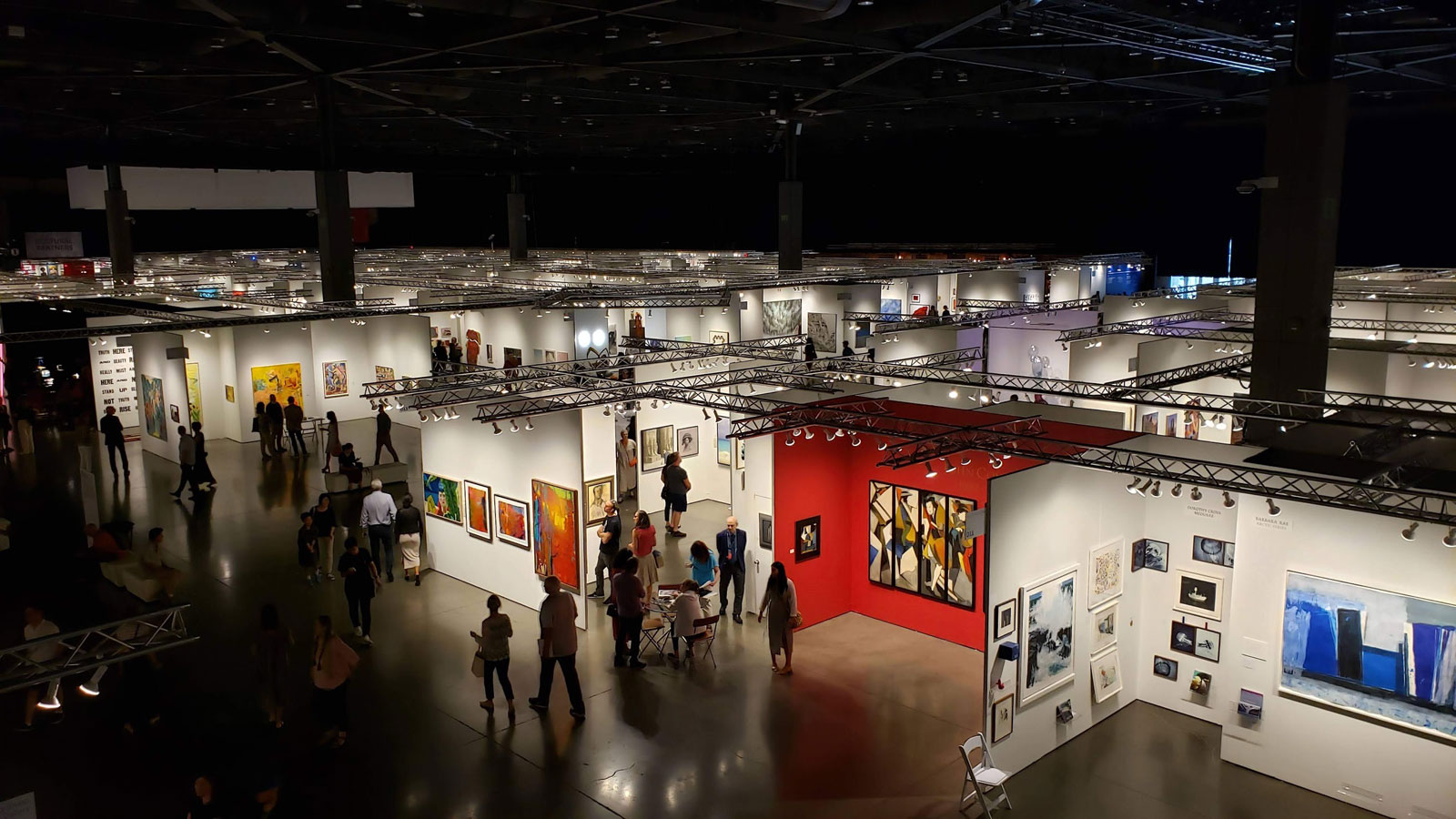 Portland gets lots of love from Vancouverites, but with increasing regularity I find myself going down to Seattle for the day or – if time allows – a long weekend. It’s just that much closer to home, with an awesome selection of good food, coffee, beer, arts, city life and nature to explore.

While similar to Vancouver in many ways both positive and negative, Seattle is just different enough – maybe a little grittier with some great architecture – to feel like a proper getaway. Here’s how I spent three days exploring the city’s arts scene, including the Seattle Art Fair, while trying new things, and revisiting some old favourites…

Almost always a first stop due to its proximity from the I-5 is Morsel for biscuit sandwiches—perfect after a long drive. Next up, was a visit to the historic Smith Tower in Pioneer Square, Seattle’s first skyscraper built in 1914. A quick ride up the building’s original Otis elevator brought us to the 35 th floor observation deck offering views of downtown and beyond.

Much like Gastown in history and feel, Pioneer Square is Seattle’s oldest neighbourhood, full of cool Romanesque Revival architecture, and is now a hub of contemporary art galleries like Treason, Greg Kucera, and SOIL. It hosts the longest running First Thursday art walks which we so happened to be around for.

Then it was off to the Seattle Art Fair, much more bustling than last year, in time to see BreadFace’s performance Self Facing. As a crowd gathered, the artist carefully prodded different types of bread placed around three tables and just like she does in her videos, proceeded to smash her face into them. She didn’t use an ASMR microphone, a major draw factor to her Instagram videos, so the whole thing was surprisingly quiet.

Dinner was at Shaker + Spear at the Palladian where we were staying. I had heard great things about the place let by Executive Chef Carolynn Spence. From salt cod beignets with salsa verde, grilled octopus with hazelnut romesco, to steamed clams with fresh chorizo and the show-stopping whole fried snapper, it was all incredibly delicious. Pistachio crumble for dessert, plus well-made classic cocktails made for a pretty nice end to the evening. The cooks cracked jokes, the room was convivial and comfortable. Next time, I’m saving room the mountain of fries topped with a mountain of parmesan!

We started with an early morning boat ride with Argosy Harbour Cruise, because what better way to see a port town than by boat! It was informative and rather quite pleasant. Before that, stopped in at Macrina Bakery for coffee and posed in front of a wall by D*Face, produced as part of the artist’s solo exhibition with Treason Gallery last year.

Next was a visit to the Seattle Art Museum’s Victorian Radicals exhibition (on until September 8th ). An unexpected delight was rather the Lessons from the Institute of Empathy (ongoing), an exhibition and installation in the museum’s African art galleries that attempts to help viewers improve their ability to understand others through empathic lessons accompany works. Lunch was at the much talked about Little Uncle, a casual spot in Capitol Hill for Thai food. The dom yum wun sen was new to me and so good—bean thread noodles in broth with pork, topped with fried wonton wrappers, peanuts and lime. Will have to return before they possibly close!

Seattle’s pretty great for exploring by bicycle, with multi-use paths and bike lanes throughout the city. There are bike shares like Lime or Jump readily available but this time opted to rent bikes from Montlake Bicycle Shop. As it was Seafair Week, we followed part of the Lake Washington Loop trail to catch the Blue Angels air show over Lake Washington.

Back at the Seattle Art Fair, Infinite Sound and Color was a collaborative performance by Mike McCready of Pearl Jam and visual artist Kate Neckel, joined by Josh Klinghoffer of the Red Hot Chili Peppers on guitar, in an improvisational, immersive performance that included drawing, painting, taking pictures with Polaroids, and music.

Dinner was at Rider, where every dish from Executive Chef Dan Mallahan was pretty as a picture and delicious, truly showcasing local produce and ingredients from the Pacific Northwest. We tasted our way through the menu starting with Porchetta Di Testa and fried calamari; Ahi Tuna Tartare with Douglas fir tips and sesame vinaigrette, sea lettuces, and kewpie mayo and other tasty components; Dungeness Crab Toast with shaved fennel and coconut milk used like a mayonnaise; and Rockfish Crudo, which really celebrated summer strawberries—iced, green, pickled. A new Handkerchief Pasta dish with pretty petals and nasturtiums pressed between its layers, revealed scallops, mussels, morels, corn, and sungold tomatoes underneath. Then there was the Black Cod accompanied by all things nasturtium. Watching the cooks tend to the open fire grill, where all the cooking happens, was impressive. Dessert was a lemon tart with fresh blueberries and pickled juniper berries. Should I add that drinks were awesome and equally showed off local produce?

The Elliott Bay Trail was perfect for a morning run, winding along Elliott Bay from the piers, through the Olympic Sculpture Park and Myrtle Edwards Park. Stopped in at Dahlia Bakery nice and early to avoid the lines for breakfast. While famous for their triple coconut cream pie, I opt for their breakfast sandwiches on house-made English muffins and always stock up on a few English muffins for home.

Next up, Seattle Center to see the Chihuly Gardens, and the always stunning glass sculptures. (Visit the café to see Dale Chihuly’s collection of trinkets, toys, and things). While there, we decided to take a trip up the Space Needle for the first time. (A whopping $128 million was recently spent on improving the visitor experience!) We then checked out Amazon HQ to see the Spheres where there was a small pop-up market (underwhelming considering the abundance of artisans in the city), and to see the hype about Amazon Go.

Lunch was at Stateside in Capitol Hill, a favourite spot for things like Hong Kong-style charcoal waffles with coconut-pandan syrup and open faced golden brown omelette topped with Oregon bay shrimp, chili, lemongrass, rau ram and crab paste. The trip finished with a visit to a couple of breweries in Fremont (including Lucky Envelope), and a stroll through Volunteer Park at dusk, lit up with light installations as part of the Lusio Light Festival.

In keeping with the art theme of the trip, we stayed at Palladian, a boutique Kimpton hotel, located in the Belltown neighbourhood. Within walking distance to the waterfront, Pike Place Market, Seattle Art Museum, Pioneer Square, many galleries and restaurants, meant ditching the car in favour of exploring the city on foot. The interior design, thanks to San Francisco designer Nicole Hollis, sees a dark and glamorous lobby with paintings of iconic Seattlites like Jimi Hendrix and Bill Gates in gilt frames. Rooms are contemporary with exposed brick walls, bright and comfortable. A plus was the local Caffè Vitta coffee in the morning and bicycles available for guest use.

Many thanks to Visit Seattle & Kimpton Palladian for their generous assistance and guidance with this trip.