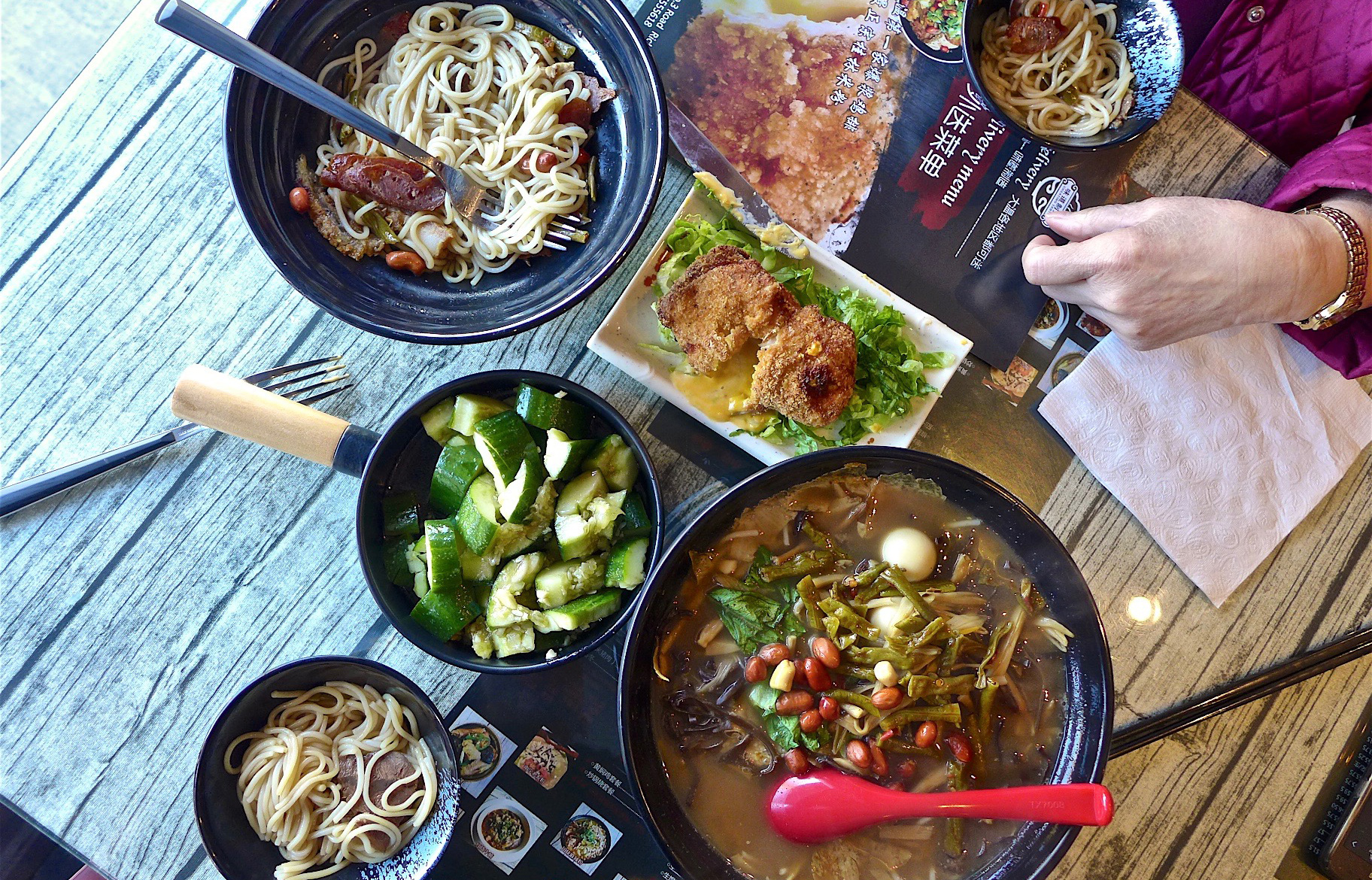 In a Richmond Strip Mall, Seeking Out “Explosion Pulp Chicken”

A table spread with Guangxi deliciousness at Creating Taste

Never Heard Of It is a series of stories exploring the Lower Mainland’s countless informal hole-in-the-wall eateries. These are the places that don’t get much in the way of traditional media play as they tend to avoid the typical paths of PR, seldom fiddling over tweets, posting imagery to Instagram, or playing the Facebook game.

“Explosion Pulp Chicken”. That’s what the sign read. How could anyone curious about food resist that? My friends and I could barely contain our excitement when we saw it.

Our target that evening was actually a different restaurant at the Empire Centre strip mall in Richmond. After we finished our meal there we made our way back to this place only to find that they’d closed early. Why? Because they had run out of food. I took that as a good sign. We made plans to come back soon as a group, but I was so perplexed by it that I returned the next day with my mother.

“Creating Taste” is embossed on the front of the menu, so we’ll just assume that’s what this place is called. They specialise in rice noodles from Guilin in the southern Chinese province of Guangxi, which borders Vietnam in the south. Star Wars fans will be familiar with it as Kashyyyk, the Wookie home planet in Revenge of the Sith.

Guangxi cuisine has striking similarities to the cuisines of its neighbours Guizhou and Hunan. (I previously wrote about Guizhou cuisine here in my write up of the late, lamented Yummy Mammy). The common characteristic is sourness, which is mostly imparted by pickled bamboo shoots, pickled vegetables, and pickled chilies. It is less sour than the cuisines of Guizhou and Hunan; and it is also a bit lighter owing to the influences of Cantonese food from Guangzhou. It can also be quite complex. Spices such as black cardamom, fennel seed, dried tangerine peel, cassia bark, cloves, white pepper, bay leaf, liquorice root, sand ginger and star anise are commonly used in broths, lending them a slightly medicinal quality.

This region is the cradle of the rice noodle; they are eaten for breakfast, lunch and dinner. It’s possible that the prototype for Vietnamese pho originated here. But what does “Explosion Pulp Chicken” have to do with rice noodles? As it turns out, very little. More on that later.

Mifen is a round rice noodle that is spaghetti-like in its form and in its al dente bite. The most common preparations involve adding a gravy or a broth to pre-boiled noodles in a bowl. You can then dress it with condiments like chili paste, pickles, fresh chilies, herbs, and peanuts.

Pay attention to only the first three items of the menu as they provide a concise survey of signature noodle dishes from three of Guangxi’s most important cities – Guilin, Nanning, and Liuzhou.

The Guilin noodle #1 ($9.25) is served ‘dry’ with a crispy ground pork mixture which is topped with fried peanuts, sliced sausages, pickled beans, thin slices of marinated beef, and chopped scallion (pictured above). The Nanning noodle #2 ($9.25) is a sour noodle soup, the acidity in which comes mainly from vinegar and pickled peppers. Black beans provide a funky bass note. The Liuzhou noodle #3 ($9.25) has a slightly bitter and earthy edge from pickled bamboo shoots and dried day lily flower.

The rice noodles are fresh tasting, chewy, and a little slippery – making it a challenge to handle with the restaurant’s standard issue plastic chopsticks. Bring your own with a “grippy” tips, if you have them.

The next few sections of the menu list an unremarkable array of à la carte “rice noodles plus” and side dishes. There’s a lot to explore here. The first item on the last section is “Lava Crispy Chicken”, which I’m assuming is the “Explosion Pulp Chicken” that the compelling sign boasts of outside. It wasn’t very explosive. Think of it as a chicken Cordon Bleu made with velveeta cheese instead of swiss. So odd! The owner says it’s a traditional dish of the region, but I submit that it is more likely some sort of trendy craze in Guangxi — their version of the poke bowl or avocado toast. If someone out there knows more about it, please let me know!